Online estate agency is a fast evolving sector with a handful of big competitors dominating and a large number of small entrants. With more than one claiming to be ‘the biggest in the UK’, SellingUp.com decided to look at who is leading in terms of number of properties listed on Zoopla. 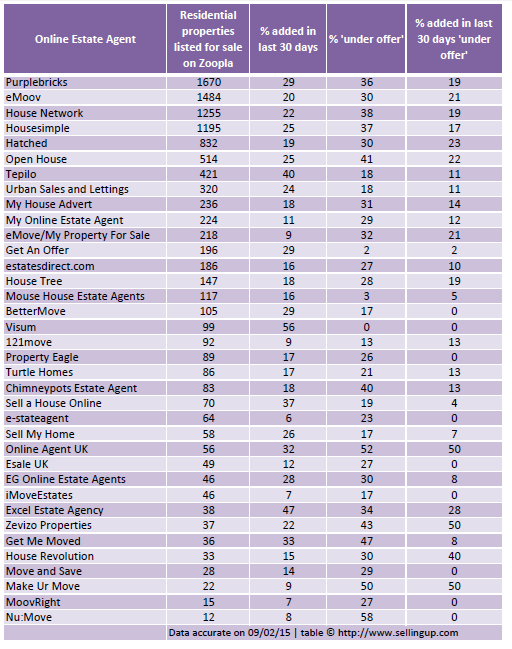 Note: The agencies in the table are ranked by the first column of figures: ‘Residential properties listed for sale’. The further three columns provide supporting data but do not influence the order.

Headline conclusions from the league table

The rise of Purplebricks

Purplebricks has overtaken eMoov: When SellingUp.com did an initial enquiry into the relative sizes of the major online agents for our online estate agents comparison tool in October 2014, eMoov was top with 1500+ listed (and it remains around that level) but Purplebricks ranked 5th with just over 800 on Zoopla. Purplebricks’ figure is now over 1600 which represents huge expansion in a few months.

Television property expert Sarah Beeny’s online estate agent Tepilo has added 40% of its listings in the past 30 days, which is anecdotal but compelling evidence that its current major advertising campaign (including TV, national Press and London Underground) is having a positive effect on consumers.

The total number of properties listed with these online agents on Zoopla is just over 10,000. However it is difficult to use this as a way to work out the total market share of online agents because many traditional high street estate agents are no longer listing on Zoopla since the launch of rival portal OntheMarket.com.

About the measures used in the league table

There are various business metrics with which online agents’ sizes could be compared: e.g. revenue, profit, funding, number of staff, branches and so on.

The measure we have decided to use is more customer-related: how many properties they currently have listed for sale. This is in part because it is a clear measure which gives an immediate idea of how the agent is doing on an operational day-to-day level.

Also, the data is readily available from a consistent source (zoopla.co.uk) which means we can compare like with like, as opposed to combining statistics from multiple places.

In addition to comparing how many properties for sale each estate agent had listed, we calculated three further figures:

A note of caution about the percentage data

We chose these measures because they could give interesting indications, but it must be noted that the figures need to be interpreted carefully and with an open mind.

For example: If an agent has a lower than average percentage of stock under offer it could mean that they are poor at converting to sales. But it could also be because transactions complete quickly and are removed from Zoopla, therefore are not ‘under offer’ for long.

There may be other cases where at first glace the percentage data seems to tell a particular story, but caution should be exercised before reaching any conclusions. The purpose of presenting the data here is to provide clues as to the size and growth of online estate agents, rather than definite facts, and readers are advised to follow up any points of interest or confusion with further research.

Why these online estate agents have been included

Prior to gathering the data for the league table, research was carried out to identify every significant company self-identifying as a nationwide ‘online estate agent’. The league table features all of the companies discovered that appear to be operating as a genuine business with at least 10 properties listed on Zoopla.

There are a small group of online agents that operate in strict regional areas and these have not been included because they were considered too exclusive and therefore not of wider relevance to the sector.

However, two of the major online estate agents – Hatched and eMoov – operate branch networks and list on Zoopla under these branches. Due to the fact that they are in reality nationwide agencies (albeit with branches) we have presented their combined figures as single numbers rather than split them up, which we felt would have been misleading when comparing the sizes of the companies.

Finally, care must be taken not to confuse eMoov with the similarly named eMove. The latter is a long established agent run by a company which also trades as My Property For Sale, and is based in Leigh-on-Sea, Essex. eMoov is arguably the better known brand that has received funding from investor James Caan and is based in Brentwood, Essex.

Feedback on this research

Please note the data for this table was gathered on February 9, 2015. Every effort was made to ensure 100% accuracy – however if any discrepancy is noted, or any clarification would be beneficial to the readers, please contact us as soon as possible.