Many reviewers state that they would recommend purplebricks to their friends because of the excellent customer service, the fair and transparent cost, and the speed with which their house sold.

Purplebricks is a leading online estate agent in the UK with thousands of reviews on Trustpilot and national brand awareness thanks to ongoing TV and radio advertising  campaigns.

In January 2012 Irish brothers Michael and Kenny Bruce closed their struggling business venture JKM Property Solutions with no return on the estimated £1.5m invested – but they had other plans afoot.

The pair had been working on Purplebricks – a business they envisaged as the world’s first ’24-hour estate agent’ – since 2011. Their idea gained significant attention in the business world. Before they’d even launched the company they had several notable players on board, including ex-Virgin Galactic president Will Whitehorn as non-executive director, and former brand director of Virgin Media, James Kydd, as marketing director.

And people were willing to put their money where their mouths were. In March 2014 – a month before the official launch of Purplebricks – former Capita Chief Executive Paul Pindar made a ‘significant investment’ as part of a funding round, as did Alchemy Partners’ co-founder Martin Bolland and DN Capital, the tech fund behind the likes of music mobile app Shazam (recently valued at £300m). 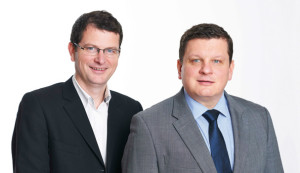 Purplebricks was launched in April 2014, and in August the same year – after it had been operational for just four months – it received a further £8m in investments. Clearly, the Bruce bothers had spied a lucrative gap in the market.

Purplebricks is now one of the most well-known online estate agents, offering a ‘hybrid’ service to thousands of happy sellers. The company focuses giving its users complete control through 24/7 communication and a comprehensive app that allows them to track every aspect of their sale, while providing extensive specialist support via property experts who live and work in the areas in question.

Supporting its offering is its dedication to the growth of ‘proptech’ (property technology) – the company spent five years developing its seller’s app (and there’s a buyer’s app in the pipeline). This focus was especially apparent in February 2015 when it launched a series of targeted TV advertisements that delivered customised ads to viewers based on their postcode, using Sky Media’s AdSmart platform.

In March 2015, less than a year after its launch, it claimed to be the fastest-growing online agent, scaling at a rate of 50% every month. In June 2015 it launched in Northern Ireland, in November it expanded into Scotland, and in December 2015 it became the first online estate agent to list on the London Stock Market.

After floatation at 100p per ordinary share, the Bruce brothers will have made more than £20 million from the stock market floatation alone while retaining stock worth at the launch valuation in excess of £50 million – which more than makes up for the failure of their previous business!

Following this landmark step, the company announced its expansion into Australia, which it successfully made in August 2016. Initially operating in Melbourne, Brisbane, Sydney and several coastal areas, Purplebricks expanded down under again in 2017, moving into Perth and Adelaide, too. Upon announcement of this second phase, Michael Bruce claimed his company had already saved Australian sellers an estimated $1.7m.

And it seems the Purplebricks has global ambitions, as in June 2017 it announced plans to expand into California during the second half of the year. Around the time of the announcement the company’s share price stood at £4.10p, nearly four times its price in mid-November the year before and the highest it had been to date – a year prior they were trading at just £1.37p each.

These numbers meant the company was valued at nearly three times the market capitalisation of high street agency groups Countrywide and almost as much as Savills. It still has some way to go before it rivals the property sector’s main player Rightmove, but leading proptech consultant James Dearsley recently released a report in which he claims Purplebricks could well prove a significant online rival – and soon.

Purplebricks offers a single fee structure (with the option to defer payment until later), which includes:

For an additional one-off fee Purplebricks will also take care of property viewings.

‘The traditional estate agency model is significantly flawed. They insist that the public comply with their working hours; however, we now live in a 24/7 society and estate agency is one of the only services that does not reflect this. It is unfortunate that people have little choice but to conduct their property sale, search and purchase during working hours, and it is a shame that customers are inconvenienced and British businesses are impacted as a consequence of this outdated model.’
– Michael Bruce, chief executive.

‘[Purplebricks have] the vision, the technology and an experienced management team. With the funding at its disposal, I see a significant opportunity for the business to lead the market in changing the way we buy and sell houses. Given that the vast majority of property searches take place on the Internet, a business that provides a “virtual” offering without expensive high street offices can significantly undercut the current market.’